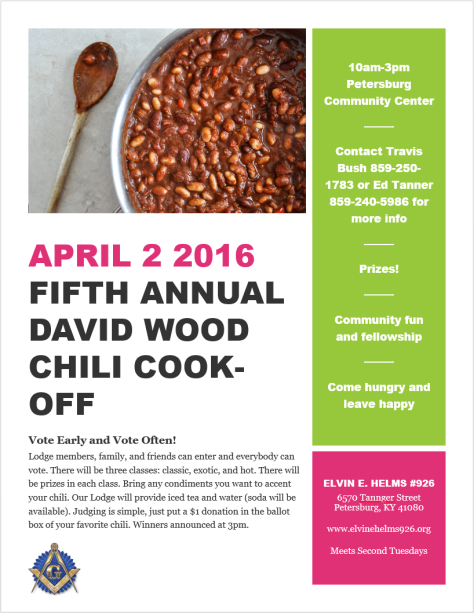 Lodge members, family and friends can enter and everybody can vote. There will be three classes: classic, exotic and hot (!). There will be prizes in each class. Bring any condiments you want to accent your chili. Our Lodge will provide iced tea and water (soda will be available). Judging is simple, just put a $ 1 donation in the ballot box of your favorite chili. You may cast as many votes as you want and we encourage you to vote often!! Winners will be announced at 3:00 P.M.

Worshipful Bro. Ed Tanner, P. M., Secretary of Elvin E. Helms Lodge No. 926 sends the following to the Brothers of our Lodge:

Elvin E. Helms Lodge No. 926 is in the process of working to attain the Grand Master’s Excellency Award and one portion is to place bicycles in schools.  We as a Lodge decided to place four bikes in Kelly Elementary School to be given to students for perfect attendance.  The school will decide when and how the bikes are given.  We haven’t purchased the bikes as of now, but will get them to the school before the school year ends.  If you can help with a monetary donation to the Lodge to help pay for bikes, it would be greatly appreciated.  This will keep us from using money from our treasury.  Donations may be sent to me or brought to Lodge.  Thank you in advance for any donation that you care to make.  My address is:  Edward M. Tanner, 1725 KY Hwy. 562, Warsaw, Kentucky  41095.

Most Worshipful Past Grand Master of the Grand Lodge of Ohio, Free and Accepted Masons, 2006, Michael A. Himes visited the Brothers of Elvin E. Helms No. 926 at our February Stated Communication as our guest educational speaker. As always, Most Worshipful Brother Himes did an excellent job and brought some very interesting and thought provoking material before the brethren assembled. Below are the two short articles he shared with us this evening.

Of the many lessons taught in the Master Mason Degree, the comparison of six men, Solomon, King of Israel, Hiram, King of Tyre, Hiram Abif, and the three brothers from Tyre, has always fascinated me.

The history of Tyre is unknown prior to 980 B.C., when Hiram became King, entering into a treaty of amity with Solomon, so that the Phoenicians and the Israelites undertook extensive trading expeditions. The city became very wealthy, and was particularly noted for its purple woolens produced there. Hiram of Tyre enjoyed a reign of 34 years, being the contemporary of both David and Solomon. According to the account in I Kings, Hiram Abif was a late arrival at the building of King Solomon’s Temple, and was sent for by Solomon because of the skill that Hiram Abif possessed in the building trade, an architect by today’s definition.

In the Master Mason Degree we learn of the dedication and love that these three had for each other — they shared in the work of constructing an unbelievable and glorious edifice to the glorification of their God. During their years spend together they developed a philosophy of life built upon service of God, love for brother, and faithfulness to each other and the tasks undertaken. Together, they agreed to share with those who worked with them, their philosophy and dreams when the Temple should be completed and the Ark of the Covenant placed in the Sanctum Sanctorum. To this end, they vowed their lives should one of them be coerced into divulging their “secret” prior to that time. Each of them would have paid the price that Hiram Abif paid, had they been the one challenged. To each of them a vow, and a trust, was to be defended at the risk of life itself. Compare to them, the impatience, greed, and infidelity of the three assassins. They could not wait for their due — they misconstrued what their final rewards would be, misinterpreting the “secret” as a tangible that would bring them wealth, influence, and free passage through life. Forgetting all of their vows of brotherhood, they undertook murder to obtain truly short-term goals.

The compaison should be obvious. On one hand we have all that is good and noble — on the other hand we have all that is evil and selfish. History itself, and the authors of this allegory, remind us again that we shall be rewarded according to our merits. Throughout history, the assassin has flashed for a moment across the lives of those he disrupts, but is eventually lost in the prevailing good that eternalizes mankind.

The eventual lesson to learn from these six men should be equally obvious. Each of us has the choice to labor zealously for the life we instinctively know to be right in the sight of God. Should we allow ourselves to be led astray by false ambition, selfishness, or impetuousness, then we too shall be sentenced to a life of desolation, and a death from the sight of God, by the imprecations of our own lives.

Let us learn from each of these six men — but let us decide to emulate the three Kings, as God would have us do.

From the Rubbish – A Rebirth

After Hiram Abif had been slain by the assassins, his mortal remains were buried in the rubbish of the Temple. What an ignominous resting place for such a Kingly personage. Perhaps feeling great remorse, those assassins then carried that body to the brow of a hill, overlooking that magnificent Temple upon which Hiram had worked so long and so hard. It is a pity that he never lived to see his architectural splendor come to completion, and see the furniture of his God seated in the Holy of Holies.

Friendship, and brotherhood, dictated that his body should be found, and a relentless search was instituted until it was found. The feelings that Solomon, Hiram of Tyre, and Hiram Abif had for each other could not have allowed any different outcome of this great tragedy.

But was it a tragedy? In the sense that a human life was taken for selfish reasons, before its work was done, certainly is a tragedy. But remember what follows. The body was found, the assassins were punished according to their own terms of execution, and the memory of Hiram Abif lives on to stimulate all of those who follow to remember his good works, his ideals, his faithfulness to a trust — and Masonry has survived because it is teaching all of these truths to so many, persisting in a just and right cause.

If Hiram had lived, would his memory have been so cherished? The name of Hiram of Tyre has faded into obscurity except for Masonic literature. Solomon has been equally accepted as the wisest of Kings, and as a scoundrel worthy of much less than he has become in history. But Hiram Abif lives in each of our minds as the symbol of all that is good. From the rubbish of the Temple has come the rebirth of the man. Rubbish is what was unneeded in the competion of the Temple, and was cast aside. Let us case aside from our lives all that is unneeded and superfluous. Let us be raised to a resurrection of our minds and spirits, that we may become memories of dedicated and good lives to our brethren. Each of us should hope, that no matter how we may die, we will die in the favor of God and our brethren, and that our good works shall survive, that our fraternity and our society will have been better because we were a part of it.

Each of us has that choice, we can lay in the rubbish forgotten, or we can rise from it and become immortal.